LAN and WAN – what are they?

In this post we answer what is a LAN and what is a WAN, what they do and why you would want one or other.

A local area network (LAN) is a group of computers and associated devices that share a common communications line or wireless link to a server. Typically, a LAN encompasses computers and peripherals connected to a server within a distinct geographic area such as an office or a commercial establishment. Computers and other mobile devices use a LAN connection to share resources such as a printer, network connectivity or network storage.

A local area network may serve as few as two or three users (for example, in a small-office network) or several hundred users in a larger office. LAN networking comprises cables, switches, routers and other components that let users connect to internal servers, websites and other LANs via wide area networks. 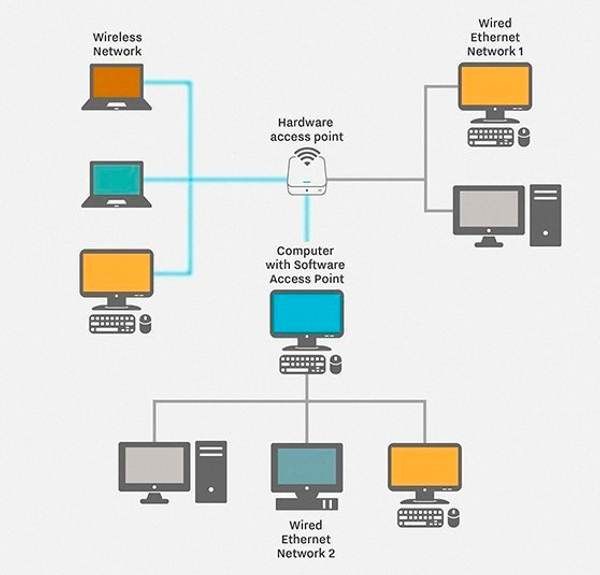 Ethernet and Wi-Fi are the two primary ways to enable LAN connections. Ethernet is a specification that enables computers to communicate with each other. Wi-Fi uses radio waves to connect computers to the LAN.

The rise of virtualization has fueled the development of virtual LANs, which allows network administrators to logically group network nodes and partition their networks without the need for major infrastructure changes.

Typically, a suite of application programs can be kept on the LAN server. Users who need an application frequently can download it once and then run it from their local device. Users can order printing and other services as needed through applications run on the LAN server. A user can share files with others stored on the LAN server; read and write access is maintained by a network administrator. A LAN server may also be used as a web server if safeguards are taken to secure internal applications and data from outside access.

In some situations, a wireless LAN, or Wi-Fi, may be preferable to a wired LAN connection because of its flexibility and cost. Companies are assessing WLANs as primary means of connectivity as the number of smartphones, tablets and other mobile devices proliferates.

If you have two or more offices located more than a few hundred meters apart consider the installation of a Wide Area Network (WAN) to link them together as a single network.

A WAN is a geographically distributed private telecommunications network that interconnects multiple local area networks (LANs). In an enterprise, a WAN may consist of connections to a company’s headquarters, branch offices, colocation facilities, cloud services and other facilities. Typically, a router or other multifunction device is used to connect a LAN to a WAN. Enterprise WANs allow users to share access to applications, services and other centrally located resources. This eliminates the need to install the same application server, firewall or other resource in multiple locations, for example.

A virtual private network (VPN) facilitates connectivity between WAN sites. An IPsec VPN is more commonly used in continuously open site-to-site connections, such as those between branch offices and headquarters locations. An SSL VPN is often the preferred choice for enabling remote access for individual users because the data transmitted from users across the WAN is encrypted. Direct fiber opticlinks are also used to connect sites on a WAN – and they almost always offer greater performance, reliability and security than VPNs, but they are cost-prohibitive for most enterprises to procure and operate.

WAN connections can include wired and wireless technologies. Wired WAN services can include multiprotocol label switching, T1s, Carrier Ethernet and commercial broadband internet links. Wireless WANtechnologies can include cellular data networks like, as well as public Wi-Fi or satellite networks.

WANs over wired network connections remain the preferred medium for most enterprises, but wireless WAN technologies, based on the 4G or point to point radio standards, are gaining traction.

WAN infrastructure may be privately owned or leased as a service from a third-party service provider, such as a telecommunications carrier, internet service provider, private IP network operator or cable company. The service itself may operate over a dedicated, private connection — often backed by a service-level agreement– or over a shared, public medium like the internet. Hybrid WANs employ a combination of private and public network services.

Here are just a few advantages of the WAN system

Editor - Alastair Dodwell
Surrey Hills resident and technology evangelist helping to bring 1Gig to as many local citizens as possible. Driver of all electric LEAF and keen cyclist in the hills.
Next post

We use cookies to ensure that we give you the best experience on our website. If you continue to use this site we will assume that you are happy with it.Ok